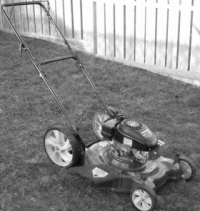 Office environments can spawn an odd kind of possessiveness. “Why did you throw that away in my trashcan, not yours?” (One was closer than another). “Those are my paperclips. Why don’t you get your own?” (They all come from the same place). You could attribute it to the personalization of space, but I personalize and yet I still look at all the basic instruments as community property. In fact, they come from the same community supply closet, so how do they become protected possessions on the way to your desk? I think, it’s a general phenomenon in a culture obsessed with personal property.

In a song called “47 Lawnmowers”, a musician critiques the fact that if you drive down an average residential street, you’ll find 47 lawnmowers: stored in 47 little sheds or garages, representing a tremendous investment, and used once a week. There’s no concept of having a community toolshed where expense, storage, and maintenance are shared, and you use what you need when you need it. Each house has to have it’s own box for its own mower for its own lawn, get 47 tuneups, 47 oil changes, fill with 47 gascans, and so on. It’s a commentary on our culture’s attitudes about stuff. True, it’s different in condo living where you share a large public space and split the cost of having one guy mow it. But from the suburban US you have a value system of . . . how did the gulls in Finding Nemo put it? . . . “Mine. Mine? Mine!”

When we start viewing office apparatuses like lawnmowers, we’ll either clutch them as though they represent the dream of personal ownership, or else look at them as tools to be laid aside when idle, shared as needed, and utilized when relevant to the goals of the enterprise, but not sources of meaning in and of themselves. It depends on your values. Mine is work. The work is the thing, and the stuff is just a means of working. Turned on its head, we end up working for paperclips, office supplies, and pretty new tape dispensers – not very enticing incentives in my book.

Stuff. It’s transient, not absolute. It’s made to serve your sense of meaning, not be a source of meaning. Yes, I know art is different; in general, though, stuff is the detritus of life, not life itself. The worst and yet most illustrative equation you can bring to the table is stuff vs. people – or, more accurately, Stuff > People. From there flows all the other ills of property: Stuff > Work, Stuff = Meaning, |Stuff| = ∞. You get the point.

I’m not attacking property rights – though I think they need to be reconceptualized in an era of digital media. It’s not communism I’m suggesting, either. I don’t think someone should come and take away your lawnmower and give you back 1/population of it. I’m simply saying that our attitudes about property can determine and reveal our attitudes about more important things, and frequently get in the way of them.

Addendum 8/8/08: This goes to the issue represented in Google‘s office mentality over Microsoft. Google envisions a document as an online object to be shared, mutually contributed to, etc. Or else what is it’s purpose? A diary? One word answer: blogs. Microsoft still thinks of documents as static objects to be sent to one another in e-mail and held on our hard drives. Documents that are not designed to function in the community, or not built on a platform with that in mind, cannot be edited by multiple people without threatening confusion over versions (“Is the one you e-mailed me the one I sent you, or does it have your changes?!?”).

When the primary vehicles of our work are not based on the concept of a collaborative community, is it any wonder we guard our staplers so avidly?We’re working within a business culture that (overall) isn’t yet treating documents as community objects but, in a lot of cases, is still at the stage of using shared network drives and sending a lot of things back and forth in e-mail. We don’t make it a priority to have online project spaces in which to collaborate, though excellent out of the box extranets for that purpose have been available for decades.

The first thing I do, whenever I’ve started a team, is create a shared space for collaboration and communication – for sharing project resources, information, ideas, feedback, and keeping each other’s work on everyone’s radar.

We will evolve, because it just doesn’t make sense not to, and the business forces will push us there. In the meantime, though, when the primary vehicles of our work (documents), and the primary platforms on which we work (computerized offices) are not based on the concept of a collaborative community (for all the rhetoric about “good teams”), is it any wonder we guard our staplers (think Office Space) so avidly?

The occlusion of technology and cost-cutting demands results in yet another jobhacking example: … END_OF_DOCUMENT_TOKEN_TO_BE_REPLACED

Managing even our personal finances is actually different when we're self-employed vs. living as a traditional employee. This is a critical realization and can often make the difference in whether, if we're starting … END_OF_DOCUMENT_TOKEN_TO_BE_REPLACED

Scene: Jack has just graduated from college with a degree in art. Parents: "It's time to give up. You've had four years to be happy and do what you want." Jack: "But I want to do what I want my whole … END_OF_DOCUMENT_TOKEN_TO_BE_REPLACED