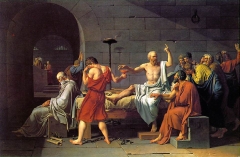 In the course of work one will eventually run into the enthusiastic semi-intellectual. It might be the vocal ideologue, telling you how everything is supposed to fit together, or it could be the lazy skeptic, who takes the position that anything outside the realm of his experience, knowledge, or specialization, is silly.

There’s always someone who tells you how the world works (or doesn’t), because he has accumulated so much wisdom and experience that it seems to him quite small. Of course, a real sage wouldn’t define the world.

Lately, I’m using a couple of out-of-the-box responses. One is, ‘you can’t answer faith’. That’s what it is, really. Faith that if the world were bigger, you would have grasped it by now. Faith that your logic is impeccable, and nothing could have escaped your pervue. Faith that those who don’t nod with you either didn’t understand you, or are just being ridiculous. Or have just been gullible enough to be taken in, somehow – sold something on a late night infomercial.

There’s always someone who tells you how the world works because, to him, it seems quite small.That leads to my other standard response, when my failure to express agreement is deemed ridiculous: ‘Hmm. Yeah, I must not be very bright. I guess I’m just not too swift. What you’re describing is apparently just subtle enough to be beyond my understanding.’ Then I just chuckle and go back to work. There’s not much the office chair ideologue can do with that, since you’re unafraid of his perceptions. In fact, it generally takes him a while to realize you’ve simply dismissed them as absurd, and meanwhile, you can go back to work. And if someone says, “well, at least you admit it”, just keep agreeing: “just so”, and go back to work.

The principle is very simple: you only duel with someone whose reasoning you respect. The rest you just let waive an epee in the air at nothing, while you do something productive. Engage by not engaging. I will occasionally knock a point out of my face, with the overzealous or the simply annoying, and that usually discourages them in the long term, though sometimes they whine about it. Generally, though, if you can manage a decent mood, it’s better to pretend they’re not in your face at all.

Philosophy is for those who know what it really is. Treated as a hobby, like any hobby, something to dabble in at the coffee pot, it really has no place at work. Just like politics and religion. That’s the real reason it should be anathema – lack of time, depth, and context, and not any nonsensical posturing about diversity, which is just another philosophy in which corporations dabble when it suits them.

If you work in a corporation, besides, it’s really a trap. It’s not true that ALL ideas are equally acceptable. It’s a system that rewards whiners, and for your trouble you’re just as likely to get someone whining over your answer to some question as to get a look of bewilderment. In general, it’s best not to bother, however tempting it is to respond. Barring perfections, one does what he can.

The occlusion of technology and cost-cutting demands results in yet another jobhacking example: … END_OF_DOCUMENT_TOKEN_TO_BE_REPLACED

Managing even our personal finances is actually different when we're self-employed vs. living as a traditional employee. This is a critical realization and can often make the difference in whether, if we're starting … END_OF_DOCUMENT_TOKEN_TO_BE_REPLACED

Scene: Jack has just graduated from college with a degree in art. Parents: "It's time to give up. You've had four years to be happy and do what you want." Jack: "But I want to do what I want my whole … END_OF_DOCUMENT_TOKEN_TO_BE_REPLACED