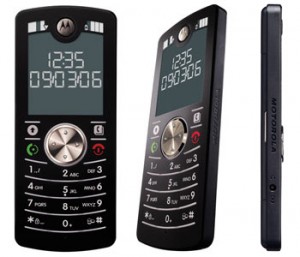 The Motofone F3. For one thing, it’s an act of dissidence, like entrepreneurship, so I like it a lot in that way: it’s been called the anti-iPhone. It’s the opposite of the culture obsessed with texting and constantly communicating with little of substance to say.
What it’s not: I use my phone as a phone. I don’t need it to take poor photos and play bad music. It’s not a hobby, it’s a tool. I plan to be on it when I have to, and not when I don’t. I don’t have a land line – I can’t see the point, since I need to keep my business with me, and I like sim card technology (pull the brain, dump the phone, put the brain in a new phone), so I need a truly portable phone that seriously rivals land line capability.
What it is:
In short: it’s got everything I need for business (and nothing I don’t) – especially true if you’ve already got a computer where you work or carry one with you (for you backpack entrepreneurs). I see those Blackberries. I just can’t get hip to needing a holster in case I get a call. If I’m going to wear a sidearm, it’s going to go blam blam – not come with an Usher ringtone. Of course, I carry a filofax, but I still think those are more useful than a Blackberry, for much the same set of reasons. And… my scalpel-thin Motofone F3 fits inside my filofax nicely (or the smallest pocket I’ve got). For you tough guys in t-shirts, roll it up in the sleeve like a cigarette pack in the 80s. Shoulders make a man look like a man, anyway. Or so I’m told. There are all kinds of creative places you can tuck a phone like this.
Other benefits: No menu (it’s not a computer, it’s a phone): for you uber-geeks, can you imagine Spock having to go through the average cell phone menu on a tricorder? Set your phasers on snooze. Physical signal and battery meters: I don’t have to touch my phone to know the charge and signal strength. Super loud ring, or you can set it to jiggle. Candy bar style with keylock: minimal moving parts, and nothing to flip or slide open. A single jack (for power, earpiece, etc): that’s right, no bluetooth, but excellent speaker phone, and so light and thin I can just hang it around my mirror, set it on the dash, or balance it on my head in a conversation.
* e-paper, in case you don’t know, looks and flexes kind of like ordinary x-ray paper, or a film negative – but it’s a computerized display – in other words, it’s literally “computer paper”. You might think I’ve been smoking too much Star Trek, but I remember in 1997 when I drew an example from nanotechnology in a room of young university scholars and they wouldn’t believe there was such a thing – now even the junior colleges are offering courses on the ubiquitous subject. “I have seen land… it does exist!” –Waterworld. In short, the Motofone F3 is the ultimate high-tech low-tech phone. So when someone says, but “You don’t have a camera or mp3!” you can say, “Yeah, but your phone still has a little glass screen, doesn’t it? That’s adorable – so retro. Got menus? Yeah, I thought so. I just can’t see carrying around a kiosk. Not into antiques, but to each his own.” Enjoy being a smart aleck – I do. One of my ’employment’ benefits.
** One web comment says there’s no indicator that the battery’s about to die. Actually, when the drop dead meter reaches maximum, it starts blinking to let you know you’ve got maybe one call left. But given that the meter is always visible, without even touching the phone, it’s hard to see an issue.
Update: And now it’s available even cheaper still ($19.95) as New Egg deal: Motorola F3 Unlocked GSM Bar Phone with Speaker Phone – OEM
Update 6/2010: Still going strong. I still love this phone.