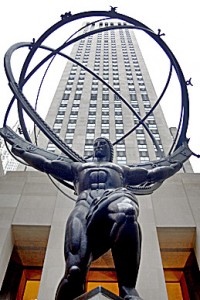 Do you work in a corporation? Ever think things would be better if you could have a Red October and terminate about half your colleagues? Not in a Arnold Schwarzenegger kind of way – but with a pink slip? Who would you fire first?

If you ran things – ran it like your own business, who would it be? Start with the gestapo – those people who have no purpose at all but to go around detecting when anyone is having fun, so they can kill it. You know, the ones who catch you laughing in the hallway or smiling in a conversation and look for a way it can be wrong. The enforcers of dress codes. Dress codes themselves are a separate issue; the enforcers need something else to do.

How about the incompetents – the people who have been faking it all along and manage to get by on who likes them – who they’re tight with – or a pretty face – but they really are quite useless.

The purposeless – those who are perpetually on break or chatting – the ones that spend most of any given day stalling – trying to look like they have something to do, while simultaneously they avoid taking on any work in any way they can.

The bad moods – the ones who are always always in a bad mood, always act like it’s your responsibility to make room for it, and always use it as an excuse to complain about work, ditch work, or dump work on someone else – those who don’t hold up their end, because it’s just not their day. With them the snippy emoticons – those who can only get away with the way they talk to anyone they consider a lesser being, because of some demographic issue, or because powerful people either tolerate it or aren’t aware.

The tattlers – you know who they are – the ones who are always trying to gain approval by turning in their peers or making their colleagues look less than desirable. The gossipers, backstabbers, petty plaintifs (they always have an “HR issue” perched on their shoulder, and they dare anyone to knock it off), perpetually sick, shirkers. . . .

Imagine you’re your own consultant and you’re cleaning house. And then, at the end, you declare it voluntary sandals month, bring in turkey and dressing for your own off-season Thanksgiving and encourage people to snack at their desks, invest in real coffee and don’t let people fark it up, cancel all the non-essential feel good meetings and demand a damned good reason for having each and every one (the fact that you had one last week isn’t good enough), limit administrative emails to three a day, based on priority, declare 20% of the day “do what you please” time and insist the other 80% be kick ass and you’d better produce time, declare all feel good moments optional and then don’t censor the bulletin board. Put a ban on one thing: bowls of candy – they’re the crack cocaine of work life – push the pushers undergound. You can eat a steak at your desk, as long as you don’t stink up the place (no microwaved food – microwaves get donated to Goodwill), but bowls of candy can be freely dumped on sight by anyone. Stock the place with all the things you might need to send or go out for – everything from Tums to Tylenol, Kleenex, hand lotion, washing machines, napping areas, books and magazines. And free, unrestricted internet: you infect it, you buy it, but no ban on e-mail and web sites.

The demand is for productivity – make it performance-based not position-based. Dump titles and fear-based relationships – everyone has a different set of responsibilities and everyone has to justify their existence by producing. If someone says, “so and so is flying in, we need to clean up and be on our toes”, be prepared to fire ‘so and so’ upon arrival – they’re scaring people – or else fire the dolt that made you afraid of the harmless visitor. Use the recouped funds from the first day to buy everyone a solid meal.

Give everyone VPN access and a passkey – everyone can work from anywhere. If you don’t trust them, don’t hire them – the point is that everyone’s work is obvious in a performance culture. No one can slack and not get noticed. Flexible schedules – 4 days on, 3 off – telecommute – whatever you can do that your duties reasonably allow. And loose job and role definitions, based on skill sets rather than presents handed out as favors or power plays or formalities – let people define their own contributions a little more freely. It really does work, if your goals are fairly well-defined. Speaking of definition, let people attack ill-defined problems – don’t silo-ize your people so they only care about their area, department, or list of tasks. That’s the death of success. What happens when things fall between the cracks of job titles? Flex, bend, stretch, reach, and wiggle.

And when you’re done, what have you got? Is it still a corporation, or is it your own business? In some important ways, it doesn’t matter anymore. It’s both. The point isn’t firing people – not really. The point is that if you could modify a corporation to operate as many great companies have done – based on performance – you no longer need police or snitches to work for you – you no longer need to control everything or limit access or send out a barrage of announcements or routinize and schedule other people – in fact, if you do, you’ll fark it up.

Not realistic, you say? Yeah, you really would have to fire about half the people that normally work in such places for it to happen. That’s why it’s hard to see right now. But then you hire the people that thrive on it. Some companies that operate this way have only a couple hundred employees, some have a couple of million, and some have one. They’re there. They do exist. They’re not even all that hard to find, though they may not be where you’re living right now. But don’t be too quick to blow off what’s working for quite a lot of people.

And if you’re a ‘bigwig’ reading this, and you see in it the death of bullshit, how you respond to that is kind of a gauge of character, isn’t it? If you like it the other way, you may not be too happy with me right now. I don’t mind. “I’ve seen land. It does exist.” (Waterworld). In fact I’ve operated both business and non-profit in this way, having seen both done the other way, and I’ve been consistently successful at it. If it’s down to you happy or me happy, I’m willing to go on without you.

In the end, the truth is, corporate culture is widely broken, but there are ways to fix it, and there are companies making a pretty good stab at doing so. Google is one of the most famous ones. But there are small companies with handfuls of employees doing the same thing. Or we start our own – but of course that’s not how this post started. Business has a lot to teach corporations and perhaps it starts in the imagination. 🙂

So if you’re reading this blog and just can’t see running your own business, but you’re up to your bare chin in “business casual”, look around for ways to flex. It goes all the way up to ROWE (Results Only Work Environment) in which “each person is free to do whatever they want, whenever they want as long as the work gets done”. But if you can’t swallow it all yet, take baby bites. Google’s just one of a number of companies doing the 20% time thing (do what you want 20% of the time), and while some people do play video games or do their taxes, most of their great applications that started out in Google Labs began first as 20% time – developed by people because a) they were interested in a problem, b) they weren’t barred from the access needed to solve it, and c) they weren’t robbed of the flexibility to do something valuable with their creativity.

In software, if you subtract features and limit capabilities, it isn’t just ‘normalcy’ and ‘standard business practice’. It’s called “crippling” the software. Companies do it, either through lack of vision, or a desperate need to feel they’re exerting control. These are the same reasons they do the same things to their employees. And they are crippling the potential of business in a free market. Just like crippleware, you get cripplejobs in cripple-companies – the access drastically reduced, the capabilities deeply limited, the responsibilities neatly corralled, the creativity controlled, and the effectiveness so predictable that it becomes the running joke – meetings, meetings, rules, lunch, and meetings, but what do we get done?

If artificial intelligence were ever born in machines, it would be from the fuzzy, ill-defined logic sets that exist in overlapping areas of development and extension. If people are or have been intelligent, then corporate life, as is commonly conceived, may actually be reversing the process, so the result is indeed artificial, and in the end, we are going through the repetitive motions more common and appropriate to machines.

I still envision a bubble in the world in which human genius and ingenuity push our horizons past even the capacity for communication with any but our peers. Fortunately, that just insures a deeply interested market, and a virtual corner on it for the rest of us. I don’t know if I’ll be a part of it, but I’d like to be.

I suspect everyone has something to contribute somewhere, and it’s a matter of pairing the right person with the right responsibility. Not everyone has the character to find and love the work of their hands, and you can’t always do it for them. The “firing people” thing is really just making a point – the people that can help you, that can help any enterprise, are those who if not satisfied with what they’re doing, are doing it with satisfaction – the work is the thing – it’s always the work. The other baggage, that makes it like a cross between Jerry Springer, Night Court, and the Kremlin under Stalin is a sign of a lot of people being on a wholly different path and making an entirely different kind of organization.

Split personalities aside, you’ve got to figure out who you’re going to be, and be that, as a person or organization. You hear that 20% is the fabled number of productive people who carry the other 80% – the slackers – the so-called Pareto Principle or 80/20 rule. You see? That’s the expectation – 80% waste – 80% failure – 80% slackers robbing the 20% who matter of their own 20% extra effectiveness. That’s the crippling lack of vision that makes places like you work deal with the crap you deal with on a constant basis. Foo on the 80/20 rule! The point of the above discussion is thinking about a place where 80% of what happens is real work, and 20% is your own darned business, because you rock! The 80% slackers are the reason your workplace is in the shape it’s in. Frankly, I’m back to thinking about what it would be like to take the 20% and go start our own company. I say “our” because if I don’t found it, then I want in, dammit; I want in.