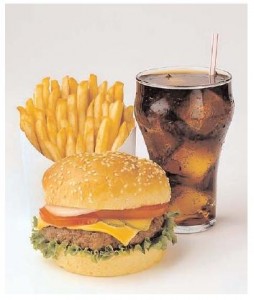 You know, some time back, as part of a ‘smaller footprint’ initiative, I started ordering down at restaurants. Junior burger at Braums – kid’s meal if I need more. Smaller beverages. Light portions. Partly, of course, you calculate the cost and the calories, not just what you throw away.

It’s a waste, of course, the extra 40% that you don’t need – not because people are really starving to death in Africa, Asia, the Middle East, and now again certainly Eastern Europe. It’s a waste because, as an old friend once said, ‘if you don’t need it, it’s doing as much good in your belly as in the trash’.

Some people have laughed at me and said it means I’m old. I have to laugh back – they don’t realize that it’s not that I’ve gotten older – it’s that everything has gotten larger. I’m still ordering the same size I was 20 years ago. More or less – I remember the 70s and 80s when Seven-11 ruined us with the “Big Gulp” and piles of candy and sweets became the norm – for “adults”. Some excellent writing has been done on this sort of infantilization – one journal cover I saw had a grown man, over 6-feet tall, holding a little box of Lemonheads in one hand, and it expertly made the point – he looked ridiculous and pathetic. He looked like someone whose mental condition had remained in High School. In that sense, too, it’s not that I’ve gotten older (I still struggle w. people’s bowls of office candy), it’s that the world has gotten younger – and I don’t mean physically.

But I notice the order-takers don’t consider me old. Even the non-tipped ones ask with some amazement: “are you sure?… that’s all?… don’t you want some (more bloated calorie crap)?” They don’t ever ask the geriatric crowd. Just me and my family. Of course, I’m putting away less than a lot of the geriatrics in front of me who order a small shake, while I order a kid’s shake (extra small). It’s all I need. What am I off doing with those calories, the Iditarod? And I look younger than the younger guys making fun; God willing, my hair will still be black while they’re waddling down the aisles of their wards.

Age aside – the economics, the health issues (bad carbs kill good people), and the general principle of the thing (I don’t want to be force-fed a lot of corporate-engineered dietary plans, like some beef they’re fattening up for a short, slow-moving life) – these all combine with the small footprint principle (take, use, waste, harm, destroy, indeed touch as little as you have to), and the useless gigantism of our age:

Would you like that in a Super Grande?
What’s a super grande?
It’s a Grande with 20% more and an extra shot.
Do you have a Mega Grande?
Actually, yes. Would you like one of those too?
Just give me a sample cup, how many ounces is that?
Sixteen.
Half of one, then.

and the result is: No thank you, no dessert – I had bread. No gallons of soda. No full pots of coffee (after 2 cups, switch to tea – does a body good). Go super-size someone else! (Remember, they’re not supersizing the meal, they’re supersizing you!) No jumbo shrimp full of hormones, no amazing super-oranges full of bizarre texture and very little flavor. No. No, no, and no. No thank you.

I would like a dietetically sound amount of real food that was cultivated without size-altering enhancements, and I would not like it served blended in a personal cooking vessel with a 16oz side of ranch, or accompanied by assorted dipping sauces, or a veneer of gravy, or smothered in enough cheese to make a loaf of sandwiches. I would like small, dammit – because in your world, small means of ordinary size, reasonable, and a heck of a lot of business sense for me.